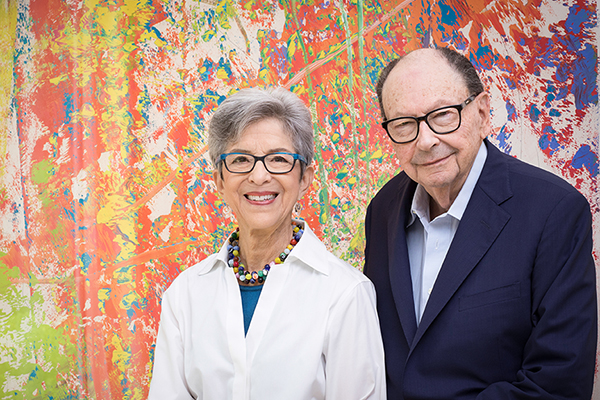 Over the years, the Foundation has provided large grants to some organizations with long-standing relationships to the Fine family. Examples of these larger initiatives include endowment funds for the Carnegie International exhibition at the Carnegie Museum of Art and the Milton Fine Curator of Art at The Andy Warhol Museum; support for applied research in science and medicine at Carnegie Mellon University and the University of Pittsburgh; and support for the Jewish Federation of Greater Pittsburgh’s many social service, education and leadership programs.

Milton Fine, the son of immigrant parents and a product of working class Pittsburgh, was a self-made entrepreneur who earned an international reputation as one of the outstanding leaders of the hospitality industry. Beginning with one motel in Erie, Pennsylvania, Mr. Fine co-founded and grew Interstate Hotels Corporation (IHC) into the largest hotel management company in the world. Mr. Fine was active in several volunteer leadership roles. He was former chairman of the Carnegie Museum of Art and Emeritus Trustee of the Carnegie Museums of Pittsburgh. He was a founder of The Andy Warhol Museum and served as Emeritus Trustee.

Mr. Fine believed that those who have created wealth have a unique opportunity to give back to society. To that end he created The Fine Foundation with proceeds from the 1998 sale of IHC. Mr. Fine endowed the Foundation not only financially, but also with the ideal and beliefs that guided him throughout his life and into his business success.

Born and raised in Pittsburgh, Sheila Reicher Fine has been a community volunteer and civic leader since her teen years. She has served as a board member with many organizations in Pittsburgh, including Shadyside Hospital Foundation, The Children’s Institute, Community Care Behavioral Health, and the Jewish Federation of Greater Pittsburgh.

In 2003, Mrs. Fine co-founded LEAD Pittsburgh (Leading Education and Awareness for Depression), a community initiative advocating for the recognition and acceptance of depression as a treatable medical condition and pressing for the need to eliminate barriers to treatment. LEAD developed a college student curriculum to foster resilience skills in young adults to protect against the development of mental disorders such as anxiety and depression.

In 2014, Mrs. Fine received the Albert B. Craig, Jr. Award for Innovation in Mental Health from Staunton Farm Foundation. In 2015, she received the Palm Beach Atlantic University’s Women of Distinction Award for her work in mental health and Outstanding Volunteer Fundraiser Award from the Western Pennsylvania Chapter of the Association of Fundraising Professionals. In 2016, Pennsylvania Governor Tom Wolf honored her among 10 women as one of the Distinguished Daughters of Pennsylvania.

In 2012, the Fines were awarded honorary doctorates of Public Service by Chatham University.